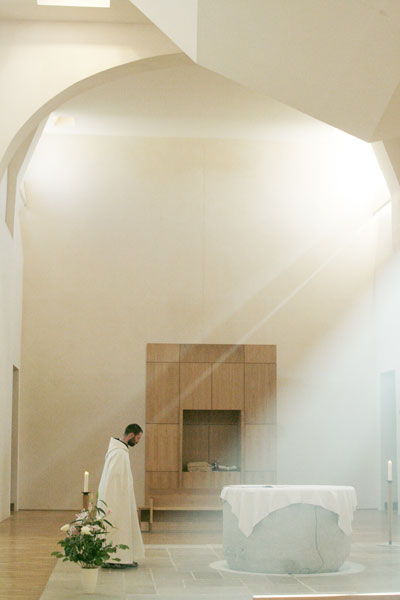 The renewal of Cîteaux is a transition between two millennia of the Church’s history: it has deep connections with the fathers of the first centuries, but also with a grip on the signs of the developments of the second millennium. In Cistercian spirituality, we can feel the communion among Christians of all times.

Cistercian authors, particularly St. Bernard, gave great distinction to their personal experience as a source of truth in their encounter with God. Notably in his chapter talks on the preparation for Christmas (sermon 5 for Advent). As those who preceded him, St. Bernard presents Advent as the remembrance of two comings of Christ: his Incarnation in the past and his glorious return in the future.

In the first coming Christ was our redemption, while at the last one, he will appear as our life.

To this classic reading, he adds a third coming, coming today to one who prays.

At this middle coming, he is our rest and our comfort.

This introduction of subjectivity in prayer remains balanced because it is fundamentally a listening to the Word, that is to say an interpersonal encounter. The Word nourishing us each day in lectio divina – this is our rest and comfort. 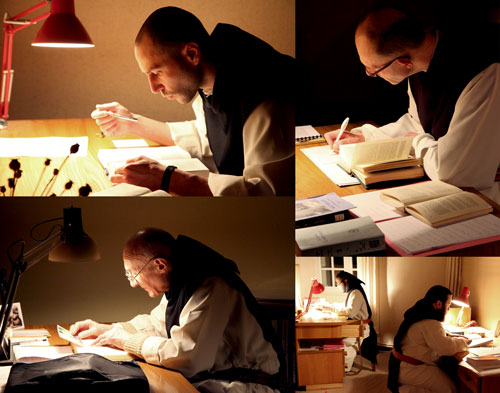 The affective expression of faith is rooted by Cistercian spirituality in the long history of the Church : on account of his love and by way of his love, God saves the world. This love took a human form and can be expressed by means of human feelings. Here are the roots of the devotion to the Sacred Heart which has so marked the succeeding centuries. Cistercian Fathers invite us to encounter Jesus in his humanity, particularly in his Passion, through the intermediary of the Scriptures and of obedience.

In order to bandage the wounds of conscience and to cleanse the apex of the intellect, nothing is as effective as constant meditation on the wounds of Christ.

However, this meditation is joyful and radiant: it must make the soul beautiful “in order that its interior eye be healed and so is able to gaze upon God’s glory, fully revealed.” The strictness of monastic observances gives the weight of truth to this dwelling in the humanity of Christ, until Christ is formed in us, to the image of the Virgin Mary.

While waiting to appear before his face, may my soul dwell in the nest of your discipline, in the crags of the rock.

Here is an area that is little explored: the canon law is a matter of mysticism and love!

When the first foundations were put in place, Cistercians had to respond to a question that was decisive for what followed: through the trials of getting started, they received the treasure of fraternal life. How would it be possible to continue to live this communion when the number of brothers made it necessary to live in different places? 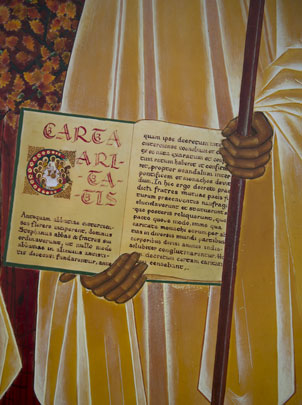 The search for a response to this question led to the writing of the Charter of Charity, the first constitution of the Order. It was a matter of constructing institutions to embody love according to a new model of relationships: the houses of the Order will have links of filiation and of fraternity; all the brothers of the Order will live a similar style of life in order to form “one spirit in several bodies.”Each house is a place of communion among the brothers, and the Order itself is a communion of communions. The assembly of the General Chapter, and not a particular person, exercises authority for the whole order.
This is a way of taking on a Biblical paradox: love is a command, it is expressed by a law. By the Charter of Charity, the Cistercians could exclaim with the Spouse of the Song of Songs:

He has put love in order in me.

This new institutional mode is in fact very traditional, but it had never before been used in religious orders. The Church itself could be understand as a communion of communions, endlessly seeking a balance between institutions of unity (the papacy, councils, communal norms) and the local life (dioceses, parishes).