After these flourishing beginnings, came a time of testing and persevering in faithfulness. Monastic life was followed, but it was not any longer in the forefront. Sometimes the wealth of monasteries made them the focus of power games, sometimes establishing monastic life could even bring along a spiritual numbness; however, the diminished visibility of spiritual practices was not necessarily a sign of decadence. In the course of centuries, through wars and social changes, the monks of Cîteaux lived, prayed, and worked. They continued to cultivate in an exemplary manner their properties: forests, ponds, and vines. 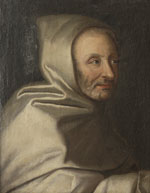 After the Council of Trent, a deep spiritual renewal appeared throughout the Church. In the Cistercian Order, it manifested itself in the 17th century in the movement of the Strict Observance. Some abbots worked to recover practices that had been abandoned: having dormitories rather than cells, abstaining from meat, insisting on silence and the Divine Office. They also introduced new spiritual practices (mental prayer or even pilgrimages). This movement stirred tensions between reformed monasteries and others: the sometimes stormy debates in this quarrel over observances took place in the Définitoire of Cîteaux.

The abbey of Cîteaux was then politically at stake and its role as center of unity for the Order was too important for it to take sides in this conflict.

During this movement of the Strict Observance, the figure of the abbot de Rancé emerged in particular: the strict reform that he put in place at La Trappe gave its name to the Trappists. Today’s monks of Cîteaux are its heirs.