In the 18th century, Enlightenment philosophy was hostile to monks. The thinkers held them as socially useless and classed them in two categories: the fanatics and the hypocrites. There were heavy consequences for Cistercian monasteries. In Austria, for example, the Emperor Joseph II ordered them to take charge of pastoral work (parishes, schools, hospitals) which harmed the unity of the Order and carried the seeds of divisions to come. 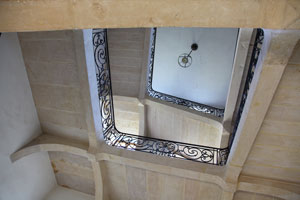 The abbot of Cîteaux, Dom Joseph Trouvé, was a man of his time. He installed workshops in Cîteaux’s large infirmary in order to provide work for the unemployed in the neighboring region. He also undertook a large architectural project: the demolition of a part of the monastic buildings and their reconstruction in classical style, to please the taste of the day. The current living quarters dates from this period.

The Revolution interrupted the construction and dispersed the monks. It was a time of confusion. The abbey, sold as government property to speculators in 1791 was dismantled and transformed into a stone quarry, then into a factory, a co-operative community (after Fourier), and finally into a penal colony for children. This last project, founded by Father Rey, required numerous buildings: Cîteaux welcomed up to a thousand young people and teachers.

Following the Revolution, the Cistercian Order broke down. Monasteries were closed as the French armies moved across Europe. Many monks remained faithful to their vows until death. A small group of monks and nuns from monasteries of the Strict Observance, particularly from the line of La Trappe, fled as far as Russia under the leadership of Dom Augustin de Lestrange. 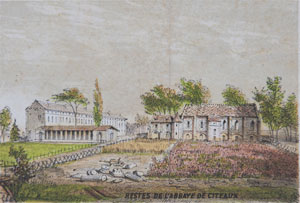 After the storm of the Revolution, they assured the renewal of Cistercian Trappist life in France. Against all expectations, the 19th century saw a flowering and prospering of fervent abbeys gathered into various congregations: the unity of the Order no longer existed.